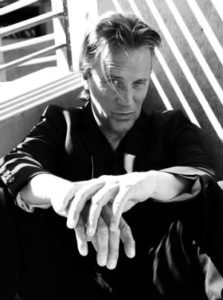 From Holyoke, Massachusetts, LaRoche started performing when he was 15-years-old. In 1982, he put together The Sighs, a jangly power-pop band later signed to Virgin Records, which released the band’s debut CD What Goes On, to stellar reviews. The band followed with Different, on Big Deal Records, in 1995.

The Sighs dissolved a year later, and LaRoche took over as lead guitarist and co-songwriter for Patricia Vonne, who released a series of successful CDs on Bandolera Records, as well as touring Europe and performing at 2013’s Montreux Jazz Festival.

LaRoche released his debut solo album, Patient Man, in 2015. Then in 2016, The Sighs reformed and recorded Wait On Another Day on Omad Records. The album dropped near the end of 2017, and received favorable reception.

Encompassing six-tracks, the EP starts off with “Seeds Of Doubt,” a smooth So-Cal alt-country-flavored tune embellished by a wonderful banjo, glittering guitars, and a tasty fiddle. LaRoche’s velvety voice infuses the tune with wistful lingering flavors, as softly suffusing harmonies arise in the backdrop.

This might be my favorite track on the EP because of its driving sinuous flow crowned by LaRoche’s polished voice.

“Drawn To You” rides a jangle-pop melody, full of shimmering guitars reminiscent of The Byrds, gleaming with spangled hues. A potent bassline and crisp percussion provide the contagious rhythm, as LaRoche’s tender tones glide above the buttery harmonics.

“Too Much At Once” travels on gently strumming guitars flowing into an undulating soft rock melody. A fat bassline dominates the rhythmic pulse, imbuing the tune with cavernous tones, as a sawing violin delivers brighter hues.

‘The Dream Is Gone” opens on a gleaming guitar and taut sidestick seguing into a beefy yet silky melody rife with alt-rock energy. This might be my favorite track on the EP because of its driving sinuous flow crowned by LaRoche’s polished voice.